Who doesn't love a good carnival? But I'm not talking about the kind with the ferris wheel and cotton candy. Instead, I'm talking about the exciting carnivals in the Caribbean which have roots is long ago medieval Venice, Italy. 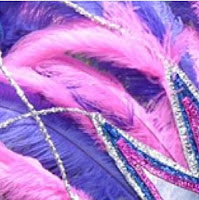 "Carnival" throughout the Caribbean region is a combination of religion, culture and tradition. Unlike Mardi Gras in New Orleans, not all islands associate Carnival with the period of Lent. But some things that are consistent among all of the islands is that the excitement always includes costumes, masks, music, food and parades. Concerts, elected kings and queens, and competitions are also typical.
Winter Carnivals are celebrated in St. Kitts, Aruba, Bahamas, Curacao, Aruba, Dominican Republic, Dominica, Cancun, St. Martin, Martinique, Puerto Rico, Guadeloupe, and Trinidad & Tobago. In the spring, you'll find Carnival going on in Cayman Islands, Jamaica, St. Maarten, Bermuda and the Virgin Islands. Summer Carnivals take place in St. Lucia, Antigua, Grenada, Saba, Barbados and Anguilla. For specific schedules of when the local Carnival is occurring and the specific calendar of events, contact that island's tourist board which you can find online.

As you can imagine, there's a lot of excitement and fun if you travel to an island during Carnival whether you are cruising there or spending your vacation in the area. However, there is a downside, too. Because of the scope of the celebration, most locals participate in some way or enjoy as bystanders. You'll find that some stores and services will be closed which may adversely affect your trip. "Carnival" can run from a week all the way up to a month. There will be key days of celebrations which are the days you'll want to be there.... or to avoid, depending on what you are looking to do!

Cruise to Your Outdoor Theater

Growing up, we had a drive-in movie theater near our home. When young, my brother and I in our pajamas, along with our parents would park and watch the latest new movie out, often a Disney film. Pull into a parking spot, take a speaker off its pole and put it on your window. As teens, the trick was to pack the car tight with friends which often included trying to sneak someone in “free” in the trunk. (I didn’t say we were smart teens!)

Back then, cruise ships offered movie theaters for those who wanted to go watch a movie.


But time went by and the local drive-in property became a Two Guys department store and then a Bradlees followed by the Wal-Mart which now resides there. 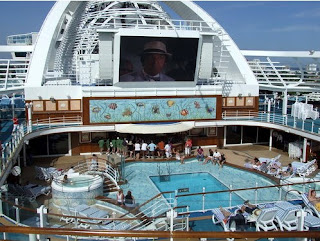 Not long after many drive-ins closed, cruise lines felt that shipboard movie theaters were wasted space on ships. Shipboard theaters were converted for other uses and guests’ cabin televisions started carrying movies.
In a new twist over the past decade, some cruise lines started building huge outdoor movie screens reminiscent of those old drive-in theater screens on some of their ships. Princess Cruises started the trend with large outdoor screens able to show movies, major sporting events, concerts and more. Now following the trend on some of their fleet’s ships are Norwegian Cruise Line, Carnival Cruises, Costa, Disney Cruises and Royal Caribbean International.
If you are looking for added outdoor entertainment or you want to lay out on a deck chair to watch a movie while remembering drive-ins from your childhood, call 610-532-0989 and ask your consultant at Connie George Travel Associates to help you choose the right ship.
~ Connie
Posted by Connie George, CTC at 11:43 AM No comments:

Travel... the stuff from which jokes are made

At a recent meeting of our Delaware County Toastmaster’s Club, member Bernie Selling had us laughing for a good five minutes about the subject of flying for his “humorous speech” assignment. Bernie agreed to my request to share excerpts from his speech with our readers. He explained that several of his jokes and phrases came from the internet and were then mixed with his own “observations and quirky insights” to create his speech. I hope that, even without his terrific voice inflections and gestures that come with hearing his speech, you’ll still enjoy this week's blog.  With my keyboard's tongue in cheek:

Do you remember how, when you were a child, traveling was so exciting, so much fun? Especially when you got to fly somewhere in an airplane? Man, how things have changed. Between TSA, long lines, baggage fees and whatnot, it really stinks.
Labor Day was a few weeks ago. My wife, son and I flew to Grand Rapids, Michigan, to visit my in-laws. Grand Rapids is a small city, and there not much to do there---but my wife likes to see her family every so often, so we go. My son says it’s boring. I say it’s a study in sensory deprivation. 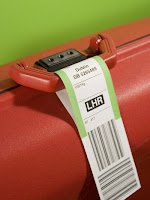 We go to the Philly airport, and right away the ticket agent demands 75 bucks. This is so she’ll allow us to bring luggage on our trip, which is useful for people who like to change their underwear once in a while. After this shakedown, we go and visit our friends from TSA.
When we get to the security area, we get some fine and dandy news. On this day, the screeners are testing out one of those new optical disrobing machines. They won’t really install these in Philly until next year, but they want to make some trial runs first. We stand there and get scanned, because we’re obedient sheep and we always do what people tell us. After the scan, they tell my wife that she needs an enhanced pat down. Why? Because she’s wearing cargo pants. You know, the kind with all the big baggy pockets. It turns out, the scanners cannot see into baggy pockets. I guess they figure that’s okay, since pockets are probably the last place anyone would put sharp things--like pocket knives.

As I watch my wife getting patted down—in an enhanced manner--I’m reminded of an article I read a year earlier. It said that two thousand women had complained about excessive touching by TSA screeners. And a week after that article, THREE thousand men applied for jobs at TSA. Maybe they applied because they liked TSA’s new motto: “It’s our business to touch your business.”

After TSA is finished, we proceed to our gate. We go out the door, down the stairs, then we cross over some tarmac, then climb up the stepladder and stoop low to get into our little connector plane to Grand Rapids. Years ago, if you flew to a modest-sized city like Grand Rapids, you would probably fly in a Boeing 727 or maybe a DC-9, something that actually had jet engines. Now, they put you in these beat up old propeller planes. Our plane is a buzzy old gnat called an SBR-85. I think SBR is an acronym. I think it stands for “shoulda been retired.” We carefully proceed down the little plane’s narrow aisle and find our seats. As usual, I get to sit in the very last row.

After I buckle up, I look up and ….there I see Paul Bunyan’s great grandson squeezing into the plane. This guy is so immense, and the aisle is so cramped, that as he oozes down the aisle he is literally smearing his head along the ceiling. He gets about three rows ahead of me and sits down. As he sits, there’s this [crack], as his seat-back literally breaks and he slumps into the lap of the guy behind him. This is what happens when airlines use leftover aircraft from the Hindenburg era.

This results in a delay of 30 minutes while mechanics come in to remove the carcass of the collapsed seat and bolt in a new one. Or at least a less old one. Finally, with some creaking and groaning, the little plane that could climbs into the sky and we’re on our way.


The propellers are noisy, but our flight is really quite smooth. ….Our landing … is not. A pilot once told me that an airplane landing is basically a controlled midair collision with a -- planet.  Now I understand.

The plane—or what’s left of it--slowly rumbles to a stop. After the passengers start breathing again, we get up to leave the plane. The flight attendant and embarrassed young pilot stand up front, saying good bye and thanks for our business. I’m the last one off, except for this little old lady walking with a cane. As she’s about to deplane, she says to the pilot, ‘Sonny, would it be okay if I ask you a question?' Of course, Ma'am,' says the pilot. 'Which is it', the little old lady asks, 'Did we just land, or were we shot down?'
Posted by Connie George, CTC at 9:15 AM No comments:

KISS frontman, Gene Simmons, is in the news for more than just the recent marriage to his longtime girlfriend, Shannon Tweed. This time, he’s in the travel news. With two performances and theme events, a boatload of people will be rockin’ and rollin’ all night long during the upcoming KISS Kruise on Carnival Destiny next week!


KISS is joining a continuing growing trend of celebrity singers and bands performing on cruise ships. Lynyrd Skynyrd has also played on Carnival. Taylor Swift, Rhianna and Bowzer (former lead singer with Sha Na Na) are among many who have performed for guests on Royal Caribbean. While James Taylor has thrilled fans on Cunard’s Queen Mary 2, NCL’s guests have enjoyed the sultry pop sound of Sara McLachlan. Holland America has pleased American Idol fans by having Adam Lambert sing on one of their ships (pre-AI) as well as the Texas Tenors (post-AI).

How do you get to be on a cruise with your favorite performers? Some celebrities are on chartered “fan” cruises either alone (such as next week’s KISS Kruise) or with multiple celebrities typically in the same or similar genres of music. Other times a singer will be a headliner on a cruise. The best way to know is to follow your favorite performers on their websites, Facebook and Twitter. Or you can try “googling” your ship and sailing to see if anything comes up in the way of headliner news.

~Connie
Posted by Connie George, CTC at 5:03 PM No comments:

Visit us on the web: